A few weeks ago we presented the novelties for the Ho Soccer 2020 Easter collection and within all the goalkeeper...
In may 22, 2020 | By Carlos Cremades

APRIL 2020, day when HO SOCCER presents its new EASTER goalkeeper glove collection. In this launch we will find a...
In abr 14, 2020 | By Manuel Pastor

HO SOCCER is with you at home, we are pleased to announce the launch of four new models, which precede what will be...
In mar 20, 2020 | By Manuel Pastor

The month of September is loaded with lot of novelties for HO SOCCER, as we introduce nothing more and nothing less than 4 new lines of goalkeeper gloves. 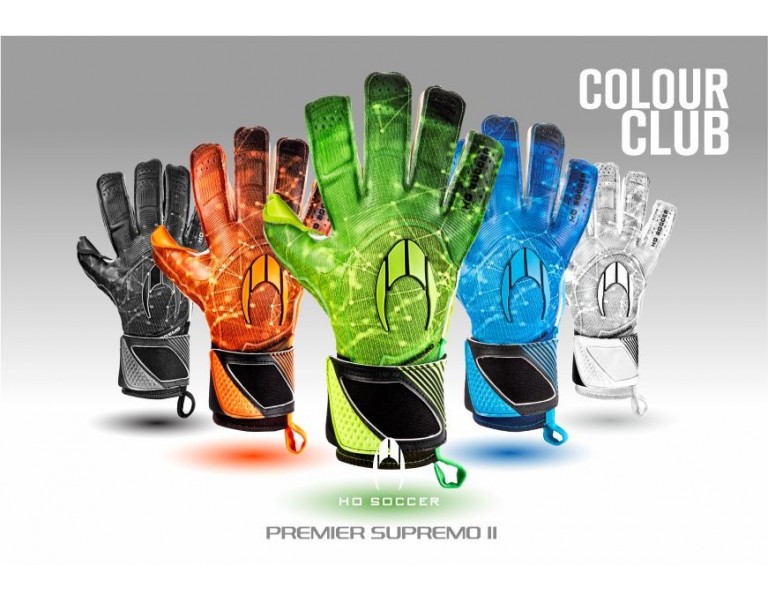 Our first line corresponds to a special launch we first introduced years back as a "COLOR PACK", and now is being established as a fixed collection every year and expected by all followers of the brand.

This release corresponds to our PREMIER SUPREMO II line.

In this range of gloves, we have carefully taken into account both the aesthetics and harmony something difficult to achieve if we consider the different types of materials used on this type of glove.

As we stated above gloves which stand out for their aesthetics but with an important quality base, where a very ergonomic Roll/Negative hybrid cut and a PREMIERSOFT palm have been mounted, the palm in color according to each back/model of gloves in this collection.

We should also highlight the TC FLEECE body, where a 3D GEL 2.0 system is applied. The wristband of this glove also includes an elastic area, which allows the glove to be fitted perfectly and tailored to the wrist.

Another line added for this September launch and a very important one corresponds to the exclusive models from our World Cup goalkeepers: SANDRA PAÑOS (FC Barcelona) and LOLA GALLARDO (Atlético de Madrid) helping them defend the net in the matches within the Spanish National Team.

As always, in these lines both goalkeepers have actively participated in the design, achieving very aggressive and striking aesthetic models, which make them stand out of the crowd.

In the case of Sandra, her model is based on the Supremo Pro II Kontakt model, assembling an AQUAFORMULA latex palm and of course the customization details, to achieve the SUPREMO PRO WARRIOR KONTAKT SP.

In Lola´s case, her model is based on the Supremo II Roll/Negative model, assembling a BLACK AQUAFORMULA palm and all the details she adds to the glove, with the final product being the SUPREMO PRO GIGGLE ROLL /NEGATIVE LG.

And for the young goalkeepers in the house, we have added the clone version of these special Lola and Sandra’s models in their size, the CLONE SUPREMO WARRIOR NEGATIVE SP and the CLONE SUPREMO GIGGLE NEGATIVE LG respectively. Both models with the same aesthetics as their older siblings and made with a HARDSOFT latex palm and a negative cut.

Another model, which almost by popular request is included alone in this case in this September launch, is the ESKUDO ACTION ROLL / GECKO BLACK.

After the great reception of its predecessor, the ESKUDO model whose family was launched for the first time very recently, this new model emerges and maintains the same construction within this family, with a neoprene body and MEGAGRIP palm, yes, this time presenting a much more aggressive "camouflage" aesthetic.

We decided to mount the ROLL /GECKO very characteristic cut on this model.

Last but not least, for this new September release we introduce our “PREMIER GUERRERO” color pack

In this family the basis of the Premier Guerrero model is maintained with a PREMIERSOFT palm and negative cut, but as with the PREMIER SUPREMO II mentioned above, the entire glove has been combined in a complete harmony of colors.

As you can see, HO SOCCER´S September 2019 launch is quite complete both in color and in typology of gloves, which we hope can satisfy all the followers of the brand.